This is a short and immediate brilliant little link. Here is the link, expand it to full screen and enjoy. SITA SINGS THE BLUES. In Waldorf Education we do the Indian block in the Fifth Grade over the Ramayana. It is a terrific story and it happens to engage an insight into an actual land bridge from India to Sri Lanka and old Ceylon. But the opportunity exists to Watch This Absolutely Terrific film for Free. If you are or were a Waldorf teacher or you ever were a Waldorf Student and remember our Main Lesson books were filled with the Ramayana tale, this is really a special and wonderful piece of sort of SlumDog style Millionaire only with terrific animation and music. It is a must See and must see Now.

When you view this and Link over to ARDI AND RESOLVING RIDDLES OF HUMAN EVOLUTION, we find the true link between the divine in Man and the Darwinian creation bridge, which is like the bridge of Sri Lanka. Not to be outdone, “The Forbidden Kingdom” restores the Hanuman a.k.a. Monkey God link once more.

The celebration of the Ramayana and Hanuman where the trail of Darwinian evolution intersected with the Divine Design of humanity is a cause for celebration, but how we understand that celebration truly depends on our grasping the insights in Ardi and Resolving Riddles of Human Evolution. For if we remain in this dead end of Darwinian thinking where humanity is the result of the ape, the 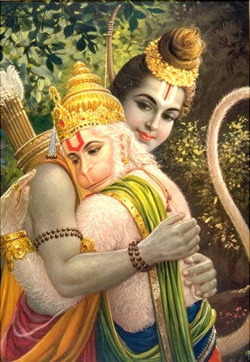 monkey king will remain imprisoned in stone. For the Monkey God or the Hindu Hanuman is how humanity unlocks the hidden divinity that was brought down by the Angels into the Material stream of heredity and matter.

“A legend says that Warlord got the kingdom after he tricked the Monkey God into giving up his weapon (the staff in question). The

Monkey God was imprisoned in stone while his weapon disappeared, but one day a Seeker will come and return it to its rightful owner.”

Two Lectures given by Adriana Koulias in Sydney

“Rama was the hero of the Ramayana, the mythological seventh incarnation of Vishnu (Christ) who descends through the gate of Ram for the purpose of delivering mankind from the iniquities caused by Ravana (Lucifer) the ruler of the demons. Ravana was causing much grief in Spiritual worlds because he had been given a boon: he was allowed to protect himself from those beings that he thought could hurt him. He did not protect himself from humans and monkeys, seeing them as harmless. Vishnu (Christ) decided to incarnate as a human to vanquish Ravana.

“In the Ramayana Rama is the eldest son of king Dasaratha of the Suryavanshi (of the Solar Dynasty) the direct descendants of the Sun. Rama is known as a sat-purusa, the ‘ideal man’ the ‘upright man’ in control of his ‘senses’ . The imagination of Rama closely resembles the image of the Christ permeated Nathan soul – the ‘ideal man’. Rama is led to Ravana by Hanuman leader of the monkeys – those who have not completely developed the upright position. Sita, Rama’s wife, is the soul-born girl, the child not born from a womb and thus not tainted by original sin – the Nathan Soul. She is sacrificed in the fires of Agni to prove her fidelity to Rama. We see his connection to the Sun sphere in the words of a sage who tells Rama to ; ‘Listen carefully to this secret. It is the heart of the sun that will bring you victory and the auspiciousness to destroy Ravana. Worship the sun, O Rama. He alone protects all beings. Pray to him.”

“You may wonder how such a reflection can occur when we know the Ramayana to be no more than nine thousand years old and Lemurian times to have been much further back in time, before recorded history. At first this may seem a problem however one must take into account what is known even to natural science. When we look up to a night sky today we are seeing the light of a star that existed millions of years ago. It has taken all this time for the light to reach us here on earth. This occurs because as we enter the planetary sphere we become subject to time. Chronos or chronological time does not affect occurrences in the spiritual world beyond the sphere of the planets. In the sphere of fixed stars time is spacial, that is, all things exist at once past, present, and future. This is the sphere in which the first sacrifice took place. It is also a fact that events that have their origin in such lofty spheres require the necessary faculties of understanding and this took thousands and thousands of years to develop.

“It was then possible for occultists or initiates capable of seeing into the Akasha or the Etheric substance wherein is inscribed all the history of the earth to observe this event in earthly evolution as if it were only occurring at that moment, even though it was only an echo, a reflection of what once had been a reality.

“We can imagine then the ancient Indian gazing upwards to the Etheric world where he finds the record of the first sacrifice of Christ inscribed into the Akasha. At the same time we must also imagine a being of human nature – a Bodhisattva – destined to re-enact on earth those events that occurred many thousands of years before in the spiritual world.

“In the Old Indian Epoch or first post Atlantean Epoch, humanity experienced another threat to the physical body through plague, disease and war. The human being whom Shure speaks of in his book ‘The Great Initiates’ the sublime ‘Law Maker’ whom Zarathustra and the Zend Avesta says that he was the first man to whom God spoke is “Rama, the Aryan Scynthian who came from northern Europe to Iran and allied himself with the remnants of the race of Turanians or less advanced human beings (monkeys) in order to capture Lanka or Ceylon from the black magician Ravana.”

It is noteworthy that Arthur C. Clarke, “2001 A Space Odyssey” where Stanley Kubrick links evolution from ape to astronaut, it just so happens that A.C. Clarke lived exclusively on Sri Lanka. There is something about capturing Sita, as the quality of Love and Wisdom in the service of an island of demons and Arthur C. Clarke and his materialism of the exploration of the stars and space, while even the Monkey’s and Apes recognize the coming of the Spirit of Humanity and love forces of Sita.

It definitely pays to bridge from Sita Sings the Blues as an ancient tale to understanding Ardi and Resolving Riddles of Human Evolution. The missing link is not Ardi, as I have described but rather HANUMAN, who assists Rama. Hanuman is as far as Evolution could go before Humanity arrived. ANU and HUMAN and HANUMAN is a far wiser connection to Evolution than Ardi , compared to our usual dim-witted science of materialistic Anthropology, from Ape to Astronaut. Waldorf Education is richer and wiser than the dumbed down education children will be brainwashed with in public education.

In the Service of Sri Rama
Sri Hanumanji met Sri Rama whilst Sri Rama was in banishment. Sri Rama, together with his brother Lakshamana, was searching for his wife Sita. (Sita was abducted by the demon Ravana). Their search had taken them to the vicinity of the Pampa Lake situated at the base of the mountain Risyamukha. Sugriva (together with his ministers) was hiding in this region. Sugriva was being persecuted by his brother Bali. Sugriva was suspicious that Rama and Lakshmana might have been sent by Bali to kill him. Therefore, to ascertain whether they were friends or foes, Hanumanji approached them in the guise of a Brahmin. His first words to them were such that Sri Rama immediately said to Lakshmana: “None can speak thus without mastering the Vedas and their branches. Nor is there any defect in his countenance, eyes, forehead, brows, or any of his limbs. His accents are wonderful, auspicious and captivating. Even an enemy who has his sword uplifted is moved. Indeed, success awaits the monarch whose emissaries are so accomplished.”

When Lord Rama revealed his identity, Hanumanji fell prostrate before Him and Lord Rama picked him up and clasped him to His bosom. Sri Rama reveals His identity as the son of Dasaratha and prince of Ayodhya, but Hanumanji perceives Him to be the Lord of the universe and prostrates.

Thereafter the story of Hanumanji is inextricably interwoven with that of Lord Rama, and is exhaustively dealt with in the Ramayana of Valmiki and the Ramacharitamanasa of Goswami Tulasidas.

To summarise in a few words: Hanumanji introduces Lord Rama to Sugriva; goes off in search of Sita; discovers and consoles Sita in Lanka; Burns the city of Lanka and kills many demons; brings together Vibhishana and Lord Rama; returns to Lanka with Lord Rama,

and features very prominently in the battle that ensues between Lord Rama and Ravana; saves the life of Lakshmana by bringing the Sanjivani (life giving herb) from the Himalayas; and served Lord Rama for as long as He lived a human life on earth.